A first look at Retribution

Let's not dilly dally with the words and the things, friends.

Retribution is coming, after all. Which means I need to get my butt back to finishing it.

To that end, I'll emphatically point out that this is hardcore rough draft material. We're talking 40 grit sandpaper, folks. As rough as it gets.

Now, I don't think it's actually that bad (my drafts normally aren't), I just wanted to throw out the disclaimer BECAUSE I'M SCARED, GUYS!

Now let's take a look at this here story biscuit. 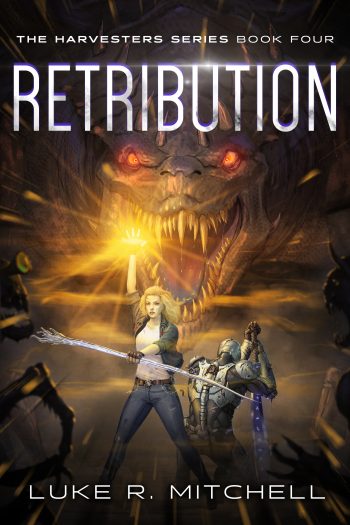 Retribution: The Harvesters Series Book Four – An excerpt from Chapter 7

She had to leave something.

“Not the best time for waiting, Rache,” Johnny said.

She ignored him, already busy at work sketching out a hurried pair of glyphs on one of the entryway columns using her own blood.

One more damn thing she’d never tried before. But it had work.

“Move your ass, Cross!” Nelken added from his seat in the rearmost Humvee.

“Get to the trucks,” Rachel snapped at the others still hovering around her.

Then she planted her hand to her blood glyphs and closed her eyes, focusing on the thought of Jarek as completely as she could. She bent close, opened herself to the energy, and began speaking.

It was only a few seconds—she didn’t have time for more—but she still expected to find Johnny, Lea, and Drogan loaded and ready to roll when she turned.

Instead, they were waiting for her with grim determination on their faces.

Any retort they might’ve made was killed in inception by the blood-thirsty howl from the station.

The four of them scrambled into the back of Nelken’s open-top Humvee, and the soldier at the wheel gunned it just as the mantis from hell came bursting through the station’s glass-paneled doors hard enough to tear them from their hinges.

Johnny started to raise his rifle then settled for flipping his middle finger to the Kul as it became apparent they were clear of his reach and he was either incapable or unwilling to catch them on injured legs.

Rachel just slumped bonelessly into her awkward position only partially on the seat between Lea and Drogan, too tired to do anything but groan.

“There, there . . .” Johnny patted her head. “We’re all safe and sound for at least ten minutes.”

Rachel was tempted to overcome her exhaustion just long enough to give the redhead a good staff jab where it counted.

An ear-piercing squawk tore through the blissful quiet somewhere above, far too loud and vicious to have come from any earthly bird.

She snapped her eyes open and glared at Johnny. “You were saying?”

Johnny was scanning the sky with a troubled look on his face. “You think I woulda learned by now . . .”

Beside them, Drogan pointed back the way they’d come from. “Kul’Ago.”

“That’s what that thing was called?” Rachel asked, scrambling to sit up.

Drogan shook his head. “That was Kul’Shimo. This is Kul’Ago.”

Lea’s whispered, “Oh my god . . .” didn’t exactly inspire confidence, and as Rachel came upright in her seat and caught sight of the monstrosity soaring toward them, she kind of wished she’d just stayed down.

To say it was bird-like seemed too mild a descriptor for the viciously long talons and the obscenely thick musculature evident around its wings and neck even at a distance. The gleaming razor edges at the fronts of its wings didn’t help either, nor did the long, spear-like beak or the crimson eyes burning at them from just behind it.

“Can’t catch a break,” Johnny muttered. “Might as well catch a beak.”

Rachel looked at him.

“What?” He gave a little shrug and moved into position to take aim with his rifle from the back of the Humvee. “Would you rather I shit myself every time this happens?”

He took his first shots, eliciting another squawk from Ago, who banked off to the left as their Humvee rumbled onto a bridge and under the partial cover of more yellow steel arches.

The cover, it turned out as Kul’Ago came out of his bank and veered around to approach the bridge side-on, might be even more partial than Rachel thought.

“Do not let his wings touch us,” Drogan said, standing to a ready combat stance beside her.

Rachel didn’t have time to ask how the giant bird thing would manage such a feat before Ago soared straight into the side of the bridge.

Steel beams gave way to razor-sharp wings with a chorus of sharp cracks.

The Kul flew on, angled and ready to give their humvee the same treatment.

Rachel pointed her staff and blasted the thing with as much telekinetic force as she could muster.

Kul’Ago wavered, but it wasn’t enough.

Then Drogan blurred past her and caught Ago in the throat with a flying kick.

The Kul jerked off course, the wing meant for them tearing a deep gouge in the bridge just behind their vehicle, then he smashed into the opposite side of the bridge, warping the steel arch outward.

Drogan, having just kicked a sharp-winged wrecking ball, hit the pavement hard enough to crack it.

“Get him in!” Nelken barked up front.

Johnny was already leaping out of the slowing humvee to rush to Drogan’s aid. Lea moved to join, but Drogan was already scrambling to his feet by the time Johnny reached him.

The two jumped back into the vehicle, and the driver hit the gas as Kul’Ago began to shake himself off and return to the task of getting them on the wing.

The Kul dove through the open spaces in the bridge arch with agility that was startling for a creature of his size. Stretched above the water, he threw his razor-tipped wings out and took flight, angling around to come after them as their Humvee cleared the end of the bridge.

“Get us in that tunnel, Williams!” Nelken shouted.

Judging from the protestant roar of the engine, Williams was already coaxing every bit of speed he could out of the poor Humvee.

A quick glance back at the rapidly approaching Kul confirmed it was going to be a close one at best.

Rachel pointed her staff, readying the energy for another strike, waiting until the last possible moment.

The sky cut to dark concrete the moment before Rachel let the blast go.

She started to let out a relieved breath then jumped as Kul’Ago smashed into the tunnel entrance after them, tearing from hunks of concrete from the ceiling and the walls. He gave a high shriek and bounded after them in a string of low, powerful leaps, his half-folded wings providing him with a small amount of gliding action.

“You don’t happen to have more charges up your sleeve, do ya?” Johnny called up to Nelken.

The apprehension in Nelken’s expression as he looked past them to the charging Kul was all the answer any of them needed.

“Right,” Johnny said, turning back to his shooting. “Looks like you’re up then, Lady Zeu—Agh!”

Johnny rolled on top of Lea just in time to avoid taking Ago’s lunging beak-thrust straight to the chest. The point of the Kul’s beak punched through Johnny’s seat like tissue paper. Then Drogan grabbed the chitinous lance and punched Ago square in the side of the head.

The Kul staggered, losing pace with the Humvee, and they all hit the floor in a tangled pile to avoid his last-ditch beak swipe.

She looked up from Drogan’s chest to find Johnny watching her from his pillow of Lea’s hip.

“Not to be that guy, but I think we’re all gonna die if you don’t drop the roof on this fucker.”

“I believe in you, Rachel Cross,” Drogan added.

Johnny and Rachel both glanced at him in surprise.

His crimson gaze shifted back and forth between them. “Is that not what humans say in hopeless situations?”

Johnny closed his eyes in a pained expression and shook his head.

Rachel just found a humorless grin tugging across her mouth as she took up her staff and stood to face the avian Kul that was quickly regaining its former pace.

Johnny propped himself on the back of the Humvee and resumed fire while Rachel dialed out her cloaking pendant and began to grasp the enormity of her task.

“I’m just learning all kinds of new lessons today,” she muttered, climbing onto the rear-facing seats and raising her staff overhead until it lightly grazed along the tunnel’s flat ceiling, jumping and skipping roughly in her tight grip.

She closed her eyes, refusing to think about how much power she was about to tap, about the risk of catching them in the fallout, or about anything other than burying Kul’Ago more thoroughly than even a rakul could hope to survive.

Instead, she sank into her extended senses, casting her will out through the tip of her staff, gathering more energy, and more—more than her body knew what to do with. She bade that body to shut up for a minute and focused on holding her half-cocked plan so firmly in mind that she almost forgot where she was or why she was doing it.

When she opened her eyes a hundred yards later and saw the winged monstrosity rushing toward them and the long, glowing line that stretched the ceiling above him, though, she remembered all too well.

Energy screamed through her body, nearly blinding her, demanding to be released before it tore out of her on its own terms.

So Rachel cocked her staff back, thrust it into the ceiling, and let the energy loose with a scream of her own . . .

Wanna know what happens next, my friend?

But hey, that's not so far off, right?

If you wanna tell me what you think, swing by this Facebook post and drop a comment (or feel free to email me). I'd love to hear from you!

Flight of the Huntress (An Excalibur Knights Tale)

Jarek Slater & the Ballad of the Broken Glass Kids