stick it to the man — buy directly from luke

(Or return to the books page for the retailer links)

View cart “Retribution (Harvesters Series Book Four)” has been added to your cart.

They said the meek would inherit the Earth.

As far as Jarek can tell, though, they must’ve been speaking Dutch or something, because those “meek” aliens sure did make a bloody mess of things. Even so, Jarek wasn’t about to make a fuss over the raknoth apocalypse. Not until those red-eyed bastards stole his exosuit.

You don’t steal a man’s exosuit…

But when Jarek’s quest for vengeance runs him straight up against an alien stronghold, and a blonde arcanist who throws around grown men like telekinetic frisbees, he soon learns there’s far worse than missing exosuits to worry about. And if he and his fiery new friend don’t put a stop to it, they may just be looking at Apocalypse Number Two…

Don your power armor, grab your copy, and join Jarek and Rachel for a rip-roaring sci-fi thrill-ride today!

NOTE: This purchase option is downloadable as a zipped folder of MP3 files. If you’re not comfortable manually unzipping a folder and getting the files onto your audio app of choice, you might want to instead consider grabbing this audiobook over at Authors Direct, where the process is more streamlined (and we both still get a better deal than on most retailers).

let me tell you a story, no middle man required

direct sales mean YOU PAY LESS and I MAKE MORE

via paypal and stripe 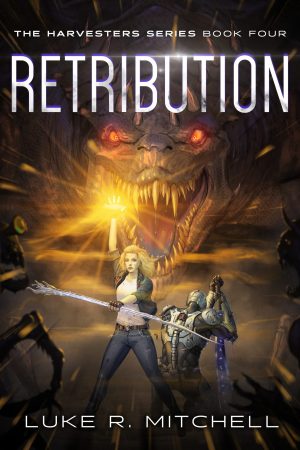