Holy guacamole, guys, do I have lots of exciting stuff to tell you about Retribution, including (oops) that the fourth book of The Harvesters Series officially has a title. And a cover. And an unofficial soundtrack/theme song.

But more on that last one later. 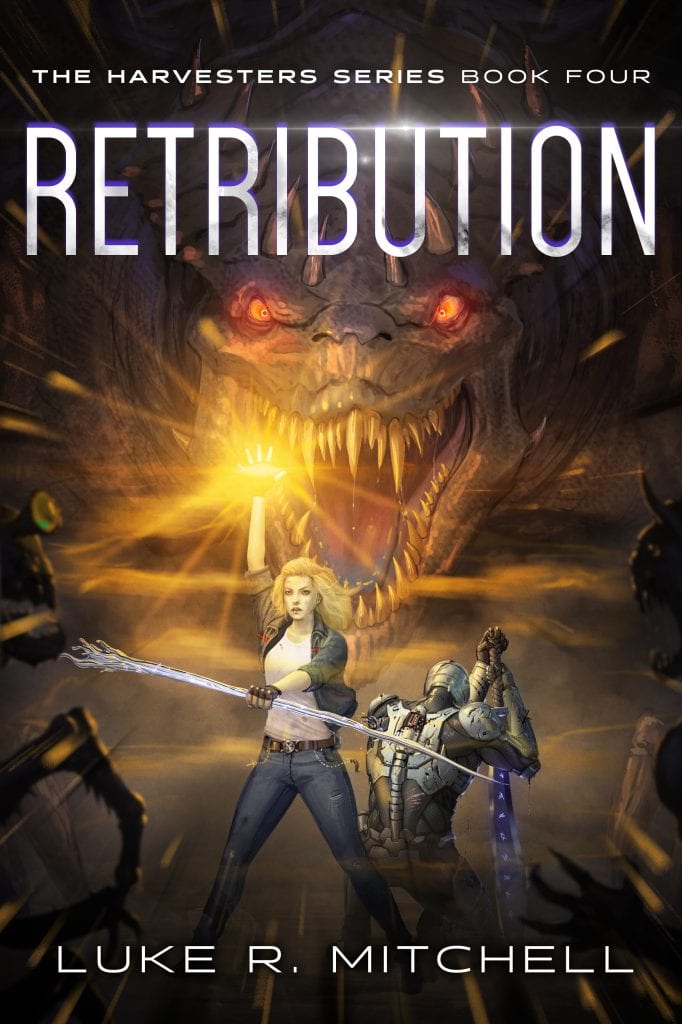 “AGH!!” I can only imagine you're ululating right now.

To which I say, firstly, yes—ululating is indeed a word.

And secondly, yes, that's a mother f*cking space dragon fixing to chomp down on our battered heroes!!!

… I'm sorry. You know how I get excited and whatnot.

Needless to say, Jarek and Rachel are having a rough day this time around. And boy am I excited to tell you more about how and why.

I won't lie, I really wanted to drop an excerpt in this post to give you a taste of what's in store…

But I think I'm gonna have to hold off a few weeks on letting those glorious little story cookies drop.

For now, I thought I'd share a little tidbit about an unexpected blip along the ongoing Retribution writing journey.

“Frontlines” – the unofficial sorta-theme-song of Retribution

Here's the thing. If my rough understanding of my readership is accurate, I'm guessing a lot of you are not going to like this song.

Rest assured, it's not really indicative of the tone of the story, it's just… You know what? I should probably start from the beginning.

I listen to a decent range of music while I write (and a vastly wider range outside of writing time, but that's another matter).

One day, as I was somewhere in the middle of outlining Retribution, I was in an electronic kind of mood, and a song I'd never heard before popped on and immediately caught my attention.

(Side Note #1: It should probably be mentioned that I MIGHT have the TINIEST little case of synesthesia—especially when it comes to music.)

Anyhow, long story not-so-short, the tune pretty immediately hooked me. And maybe it was just that I was already in my Retribution head space, but I could see it, guys.

EVERYTHING, you guys. I could see everything.

For the first time ever, I saw the story flashing through my head like an honest-to-Weinstein big Hollywood movie trailer.

And holy crap, was it a blockbuster.

The song opened slowly, and I could see Rachel clear as day, roaming the outskirts of a ruined Pittsburgh, PA, looking for Jarek and on the edges of despair.

The tune picks up. Tenser. Tenser. I see a grim-faced Jarek elsewhere, strapping on his sword and sliding his faceplate closed, ready to wade into the heart of effing darkness.

The buildup crests and spills over into bass-pumping, synthy goodness, and I see all hell breaking loose.

ALL OF THE GOOSEBUMPS.

Is your interest peaked yet?

… After pointing out one more time that it's entirely possible you'll listen to this and wonder what the hell I'm talking about.

Don't worry, I think you're still gonna love the book if you've enjoyed the last three. This song just really clicked with me—on that day, in that particular moment—in a way that helped this story gel in my head, so I wanted to share it with you.

Okay, okay. You hate it. I understand.

Again, you can rest assured, if you've been digging the series so far, I'm pretty sure you're still going to love this book.

(There will be no electronica in said book. Promise.)

I just wanted to share what's probably been the most inspiring and unexpected part of the work on Retribution thus far.

And if you hated it, as a consolation, here's another song I've been grooving to a lot lately during my writing hours.

If you can put in headphones, close your eyes, and listen to the first three minutes of this song without losing your breath and breaking out in weapons-grade goosebumps, then… Well, then you might be totally normal…

I am most certainly not.

(Side Note #2: If the last few sentences sounded overly emotional, it's only because I'm actually listening to “No Man's Land” as I write them. Rupert Gregson-Williams. Not even once.)

What do you think?

Let's be honest, I should probably get back to actually finishing this draft of Retribution.

But, in the meanwhile, I'd love to hear what you think about the cover (and about my creepy music fixation, if you wanna go there).

– What's your favorite part of the new cover?

– If you had to pick a Harvesters Series “theme song,” what would it be?

Looking forward to hearing from you!

P.S. I'll definitely be posting an excerpt or two in the next month or so, so keep an eye out!